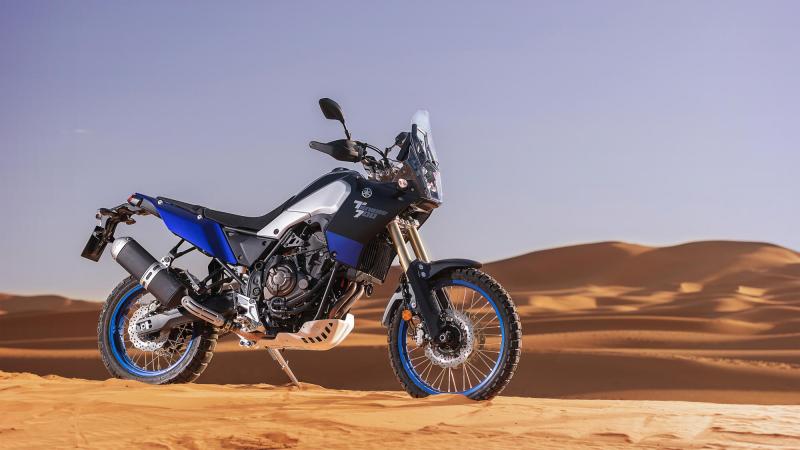 The Yamaha Ténéré 700, a brand new Adventure class model, has attracted a lot of attention from the public as it has had a long development and is practically the first Japanese motorcycle in the mid-ADV class, a class that has been reduced to just a few models in the last few years. Understandably, the Yamaha Ténéré 700 is eagerly anticipated.  Almost four years ago, spy photos and information appeared that Yamaha was working on something new, which turned out to be completely true.  Yamaha was, and always is very serious about starting and developing a brand new motorcycle, which it has just begun to introduce in a class that is becoming more popular, and on a single motorcycle accommodates the drivers that want to enjoy a dynamic ride on the asphalt, but also on demanding terrain, off the beaten track.  During the aforementioned years, a number of questions on the Yamaha Ténéré 700 came up, so it was time to answer all those who were waiting patiently for this model.

The Yamaha Ténéré 700 is not a down sized Super Ténéré, but a model created from the start.  And the start, that is in fact the basis of all, is a 19-kilogram steel frame that incorporates many rally racings experiences.  The all-new frame has the task of fully balancing the rigidity and elasticity of an ADV motorcycle.  Yamaha in fact does not really define the Ténéré 700 as a pure ADV motorcycle, but places it in a specific class that it calls the "Rally-Brad Dual Sport" in order to fully describe its character.  The Ténéré 700 was created by Yamaha’s European department and its design team in Italy, which also has a lot of experience in development and experience in rally racing.  For sale in Africa, the Ténéré 700 is manufactured in France, while for US, and other global customers it will be made in Japan.

With four miniature headlamp headlights, and a low-mounted exhaust, the Yamaha Ténéré 700 stands out from the competition as well.  The Yamaha Ténéré 700 restores motorcycle driving to its core values, and unlike its competitors, it does not have electronic aids such as traction control, driving modes and cruise control.
The instrument panel LCD is positioned vertically, placing it in the driver's field of view without having to lower its gaze.  The instrument is not TFT technology, but it does provide the driver with all the necessary information.  On its upper part is a carrier for a mobile phone, navigation or road map.  It is a standard 12-volt outlet for powering and charging all electrical devices.

The drive has been tested, proven and by opinion of many, one of the best two-cylinder units in the world.  It was introduced to motorcyclists for the first time in Yamaha MT-07, and has since justified his name - MT - Master of Torque.  The 689 cm³ twin-cylinder, with Yamaha famous crossplane crankshaft has 72 hp at 9,000 rpm, with 68.0 Nm at 6,500 rpm, identical to the MT-07. However, during the development and testing, a special injection and ignition mapping was developed for the Ténéré 700, the intake and exhaust manifold adapted to different requirements in off-road driving, as well as the improved, and more efficient water cooling system.

The gear ratios have also been adjusted, so instead of the 16/43 tooth sprocket combination, the Ténéré 700 has 15/46 teeth, a 9% reduction from the Yamaha MT-07.  Not only does Yamaha claim the CP2 engine to be the most reliable engine in the class, so do independent statistics, which without, exception place this two-cylinder unit at the very top of reliability.

The Ténéré 700 is top-notch thanks to its excellent balance that allows for a compact unit and a vertically mounted gearbox, centralizing the mass of the motorcycle and reducing wheelbase.  The choice of the 21 "front wheel is the result of experience in rally tracks and lengthy field trials.  The front brakes are lightweight Brembo calipers with 282mm discs.  The Ténéré 700 is the first Yamaha to have an ABS system that can be switched off or on if desired.
The 16-liter tank offers almost 350 kilometers of autonomy, while the sidewalks with rubber vibration dampers and standard seat height of 875mm take care of ride comfort.  The shock absorbers are adjustable KYB, the front forks have a stroke of 210mm and the rear suspension travel of 200mm.   The weight of the motorcycle is 204 kg with a full tank of fuel and oil.

Yamaha Ténéré 700 is ready for adventure, are you?